Each year the at the Cairns City Kennel Club’s Annual General Meeting, one member is selected for the award of Life Membership. This award is in recognition of the individual members dedication to the club through their work, contribution, active participation and upholding of the Club’s core values.

Wayne has been a member club for over 15 years. He actively competes in Dog Sports and has also exhibited at dog shows. He’s a regular volunteer at working bees and other club activities and is a dedicated obedience instructor, rarely missing a class on Tuesday nights. In recent years Wayne has also taken on the role of Maintenance. 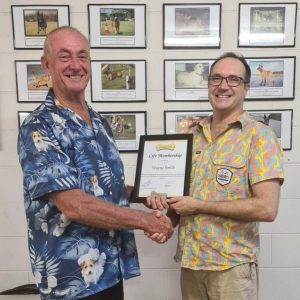